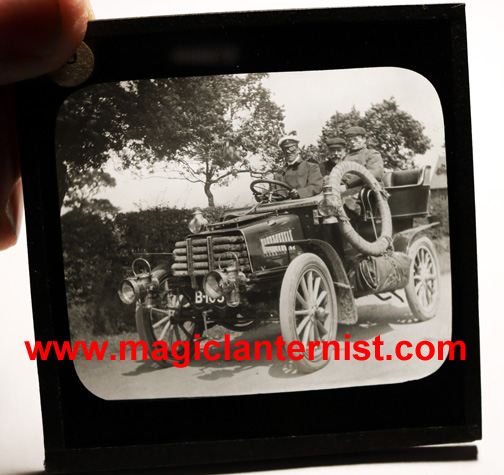 This is a story about the power of the internet to throw light on old photos. A few years ago, I was offered a small group of magic lantern slides which I thought were interesting because of the clarity of the images and the subject matter, a veteran car. The photos are almost certainly family ‘snaps’, not intended for re-sale to the public and were either taken by a professional photographer or by a family member with an expensive camera. The family were wealthy enough to own a car and employ a chauffeur and are clearly proud of their, perhaps new, motor car. At the time of buying the slides, the seller said he had been told that they came from a mill-owning family from Blackburn, Lancashire.

So, the challenge was to identify the family and the car. The registration number is B 103 and, ideally, the internet would have instantly yielded the date of registration, name of the owner and their address but no such luck. However, there are some clues in the photos. The car is parked (or broken down) outside the ‘White Swan’, whose landlord was F.C. Hamlyn. There is only one reference to such a pub on the internet and it’s in Great Sutton near Ellesmere Port in Cheshire. Hamlyn was the landlord in 1902 and probably for several years after that. The pub exists today and, at the time, it would have been within motoring distance of Blackburn and on the route to New Brighton, a popular Victorian seaside resort on the Wirral peninsula. Another website states that cars with the registration ‘B’ were registered in Lancashire between 1904 and 1919. So, assuming that they were numbered sequentially, B 104 probably dates from 1904 or perhaps 1905, which ties in nicely with the pub information. So now we have the when and where but, unfortunately, I’ve not been able to identify the owner or the make and model of the car. Can you help with the latter please? 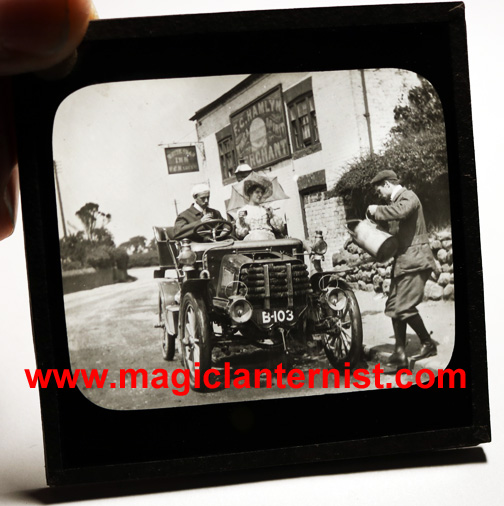 Notice the huge spare tyre stored on the side of the car which, in another slide was used, as they had a puncture. The early days of motoring were fraught with mechanical problems and a chauffeur had to be driver, navigator, mechanic and cleaner. The AA wasn’t formed until 1905 and garages were few and far between so, if you broke down, the local blacksmith would often be called upon to repair or even make replacement parts.

Other slides from the same collection show the family on a boat trip on the Leeds and Liverpool Canal …… but that’s for another time. 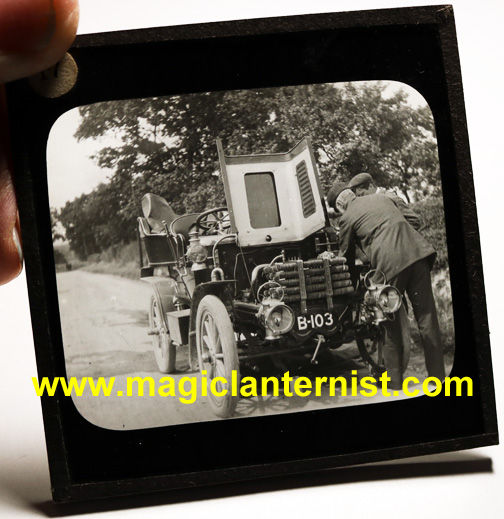