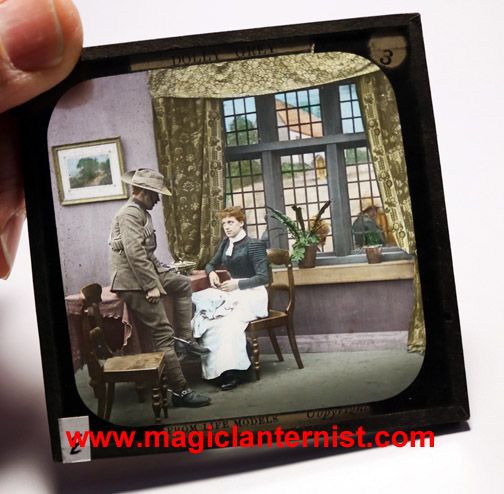 Some of my favourite Victorian magic lantern slides are illustrated songs ….. popular songs of the day that could be projected onto a screen, so that the audience could sing along. They were made in the 1880/90s and early 1900s for use in magic lantern shows.

They were produced in sets with pictures that told the story and came with a printed sheet of the words. Most were produced by Bamforth’s (of Holmfirth, in Yorkshire) and, as you can see from this wonderful example, they were made by photographing actors on a set with a painted back-drop. The slides were then beautifully hand tinted ….. but that’s another story. Such sets are now quite rare, complete ones even more so as, over the years, a slide or two would have been broken and thrown away, usually one that’s crucial to the story!

It’s very rewarding to project a set like this and play the music and to have an audience join in the song.

Goodbye Dolly Gray is still a well-known song today. It is generally believed to be from the First World War but was actually written in 1898 at the time of the Boer War. The story is of a soldier saying goodbye to his girl, before he leaves for South Africa. Virtually every recording of it has an up-beat tempo and comprises one verse and the chorus. It wasn’t until I saw these slides that I realised that the ending isn’t a happy one and that there must, therefore, be more verses. I needed a recording of the full song to use in my magic lantern shows and discovered that only one exists, made in 1901 by a Canadian tenor, Harry McDonough. The video below combines that recording with the lantern slide images. I hope you enjoy it.

If you found this interesting, please share it with your family and friends. If you’re not reading it on my ‘Magic Lantern World‘ website, then please visit. There are over one hundred illustrated articles about Victorian slide projection and links to my historical photo-booklets on Amazon and my Etsy store for historical photo greetings cards with a twist. You can read about my authentic Victorian magic lantern shows and talks on ‘Optical entertainments before the movies’ and lots more!