“In Dublin’s fair city, where the girls are so pretty, I first set my eyes on sweet Molly Malone” goes the famous ditty. My better half and I were there for the first time last year and it is indeed a delightful city. I can’t, of course, comment on its young ladies ‘though Molly is still there as a statue and, no doubt, in spirit too.

When these photos were taken in the late Victorian period, Ireland was politically united and British. Partition didn’t come until 1921 and whilst I have no views on the rights or wrongs of it, it does seem to be the case around the world that whenever politicians or the military determine artificial boundaries that separate people who were previously a cohesive nation, the problems (and deaths) go on for decades afterwards. India and Pakistan come to mind.

Today’s slides show a modern, bustling, Victorian city. The trams are electric (rather than horse drawn) and as the electrification of Dublin’s network started in 1896, I’m confident that these slides date from the late 1890s. 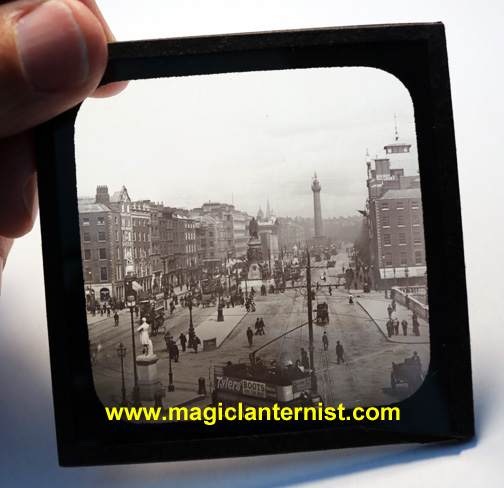 The life-cycle of tramways in Dublin was the same as in many other towns and cities. Horse trams introduced in the 1870s were replaced by electric ones at the turn of the 20th century, followed by growth in usage and expansion of the network into newly-built suburbs. In the 1930s and 40s, they were gradually supplemented and then replaced by more flexible, quieter, warmer buses. The last ‘old’ tram ran in Dublin in 1959 but smart new ones now operate as part of its antidote to traffic congestion. 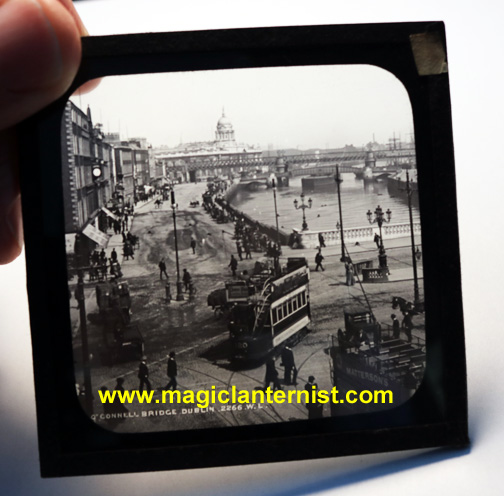