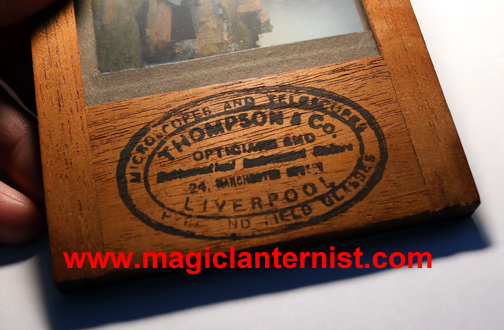 This magic lantern slide of Durham, an historic city in the north of England, is a lovely example of its type and beautifully hand tinted but not exceptional. What makes it interesting is the wooden frame that the glass slide is in and, in particular, the inked stamp on it.

At the end of the 19th century, magic lantern slides were sold in vast quantities to lecturers, professional showmen and to the general public for home entertainment. Slide manufacturers produced printed catalogues and you could order and receive them by post or buy them on the high street, often from chemists and opticians shops.

Some retailers produced their own slides and others bought them in from large manufacturers and relabeled them with their own logo, perhaps without permission, as the concept of copyright was not what it is today.

It’s not that often that we see a retailer’s mark as clear and informative as this one. It says ‘Thompson & Co, 24 Manchester Street, Liverpool’ and advertises the fact that they sell microscopes, telescopes, field glasses and something undecipherable. A bit of research on the internet shows that Thompson’s were a Manchester based camera maker operating between 1894 and 1898, just four years. I wonder what happened to the Thompson family business? Was it bought by a competitor or did it go bust for some reason. The plot thickens because the glass slide in the wooden frame is a French one of an English subject. There’s a story here for someone, perhaps a Thompson descendant, to unravel.