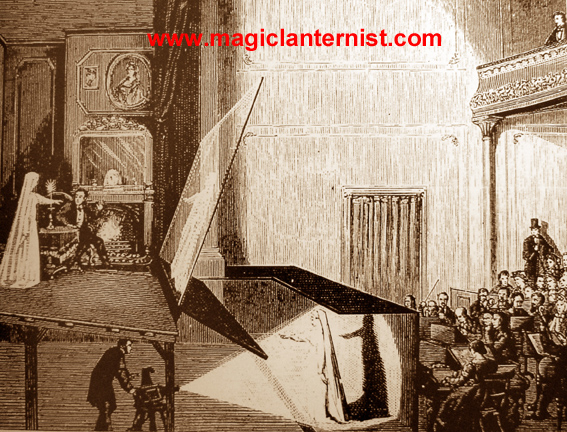 In the 1860s, the science of optics was being applied to large-scale theatrical events to produce novel entertainments that would attract the paying public. One of the premier venues for such performances was the Royal Polytechnic Institution on Regent Street in London. It was a sort of technical theme park where the public could go to see the latest scientific inventions in action and where spectacular plays and shows using the latest visual technology were staged. It was particularly well known for its grand magic lantern shows, using very large, beautifully painted, glass slides projected onto a huge screen with real actors, musical accompaniment and sound effects.

The director of the polytechnic was Henry Pepper who, amongst other things, was a scientist and inventor. One of his inventions, now known as ‘Peppers Ghost’, enabled real actors to interact with transparent ‘ghost’ actors on stage. It was an instant sensation and, in one year alone, attracted 250,000 paying customers.

So, how does it work? The illustration above reveals the secret. A huge sheet of glass is placed between the audience and the actors at an angle and the ghost actor is beneath the stage, out of view of the audience, lit by a strong light from a magic lantern projector. The laws of optics mean that the reflection of the actor appears the same distance behind the glass as they are in front of it. The movements of both actors had to be precisely choreographed to interact with each other but it worked and created an illusion that mystified audiences.

Eventually the trick was understood and copied by other theatres and showmen but it was very expensive to stage due to the cost of plate glass. After a few years, ghost shows lost their novelty value for Victorian audiences, who moved on to the next theatrical sensation.

Interestingly, ‘peppers ghost’ effect is still used to create illusions. I’ve seen it in Disneyland and a few weeks ago my son showed me a virtual reality device that uses the same principle and, like the Victorian version, you can’t see the angled glass, just floating, ghostly images. The Royal Polytechnic Institution theatre still exists and is part of the University of Westminster. Three cheers for Henry Pepper!