It’s amazing what turns up on Ebay! It’s several years now since I theoretically stopped adding to my collection of magic lantern slides. In my forty or so ‘buying’ years, I purchased over 250,000 glass, mainly Victorian, projection slides. Given that they are bulky and heavy, a collection of this size represents a bit of a storage problem, so I’ve been selling surplus-to-requirements items in my Ebay shop for over ten years now and still haven’t scratched the surface. Perhaps my kids will finish the job when I’ve gone!

Anyway, given that a major part of collecting is the thrill of the chase and that very rare items appear on Ebay from time to time, often at ridiculously low ‘buy-it-now’ prices, I’ve found it impossible not to click the buy button occasionally. Today’s slide is a case in point.

The Thames Tunnel was the world’s first one to be built under a navigable river. It took eighteen years to construct using ‘shield’ technology designed by Mark Brunel and his son Isambard Kingdom Brunel who went on to feature in one or two other engineering projects. Started in 1825 it suffered delays due to flooding, lack of money and fatal accidents and eventually opened in 1843.

It was an engineering triumph and though eventually used as a railway, was initially famous as a visitor attraction for pedestrians with thousands of Victorian visitors descending a spiral staircase at one end, walking beneath the River Thames and ascending at the other side. Various Thames Tunnel souvenirs were produced and are now highly collectible. 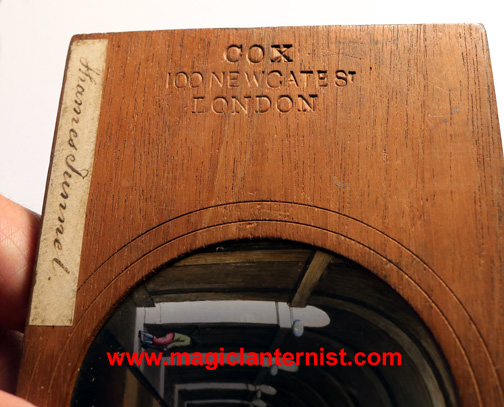 This hand painted magic lantern slide measures 7 by 4 by 0.3 inches and was made by Cox of London, probably in the 1850s. It is a stunning and very rare slide and was too expensive when new to be a souvenir so was probably used as part of a ‘wonders of the age’ magic lantern show. How could I not click the buy-it-now button when it appeared on Ebay recently?

The tunnel still exists and is part of the London Underground system. Could the Brunel’s ever have imagined that their creation would still be in use one hundred and forty years later? 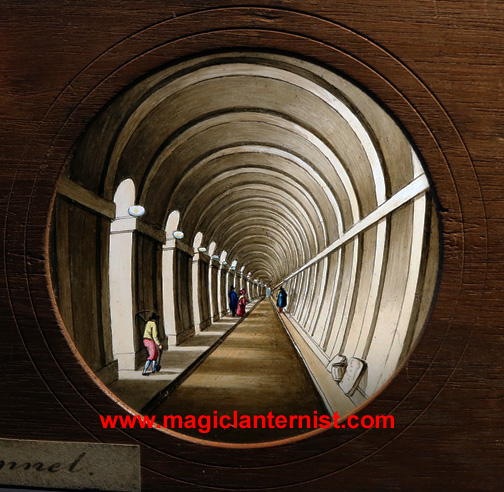