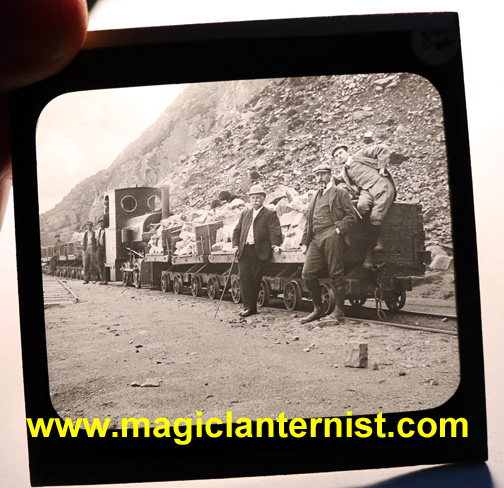 I particularly like photographic magic lantern slides that show our industrial past. These three are, in my opinion, gems of the genre. They are pin-sharp, high resolution photos that capture a fleeting moment in time in a stone quarry, probably in the early 1900s. Each of them is interesting for different reasons and, collectively, they present a puzzle that I would like to solve. Whilst they (and the other slides from the same set that aren’t shown here) have a printed ‘stone quarry’ caption, we don’t know where it is. It looks to me like a Welsh slate quarry but was Wales also a supplier of stone blocks?

The first slide, with the steam locomotive (which is called ‘Tiger’), probably shows the owner and his son, whereas the men standing next to the engine are clearly workers. Stone for building houses must have been in huge demand at the turn of the century and the men in the foreground certainly look prosperous.

The slide with the mountain in the background shows an inclined plane, a means of bringing full wagons down from the mountain and using their weight to pull up the empty ones. Photographs of operational inclined planes are really quite rare. 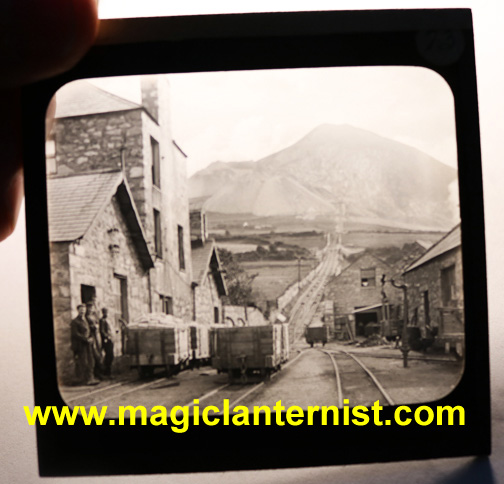 The third slide seems to show the owner demonstrating a mechanical device, attached to the wagon, to his workers. Perhaps it’s a stone cutter or trimmer, a task normally done by hand, involving considerable skill. If it is, the man in the middle, looking into the camera, is thinking ….. “If you think I’m going to smile for the camera, when this bit of kit is going to take away my job and I won’t be able to feed the kids or pay the rent, you can think again.” He might have added a few expletives as well but wouldn’t have dared say any of this out loud. Perhaps I’m mistaken and he’s really thinking ….. “What a lovely man my boss is, letting me stand this close to him.”

Given that there are lots of industrial archeologists and quarry / mine / railway enthusiasts out there, can anyone identify the location please?