This Victorian magic lantern slide is annoyingly anonymous in the sense that, whilst the scene obviously depicts British soldiers relaxing in camp, we don’t know what regiment it is or where the photograph was taken. What we do know is that the maker of the slide was George Washington Wilson and that it’s one of fourteen slides in a set published by his firm in the 1890s called ‘Under Canvas’. 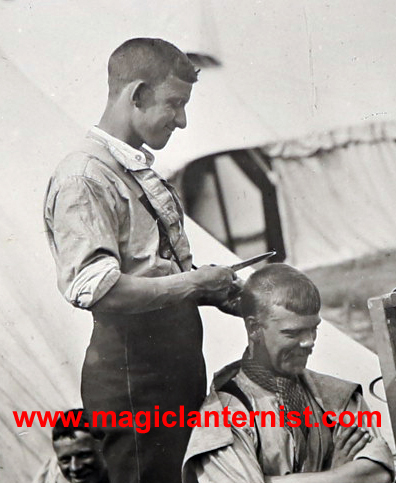 The script for this set exists in the Magic Lantern Society’s ‘readings’ library and the text for this particular slide is …..

Here we see the regimental barber giving a crop of recruits a recruit’s crop. Hair is a thing of which the perruquier makes short work. There is a curly-locked fellow stretched out on the grass waiting his turn and evidently rather ill at ease; he trembles for his luxuriant hair and the hairdresser takes a fiendish delight in giving his head an extra crop.

One of the cruelist things in connection with camp life is that after the order is given to ‘break up camp’, the cowardly fellows at once proceed to strike the tents. They strike unarmed tents that can’t strike back! Captain Wilford Brett, 76th Regiment, in his ‘Hints on Bivouac and Camp Life’ says “The formation of the camp should take no longer than three and a half minutes and two and a half striking it.” How would he like to be struck for two and a half minutes without raising an objection!

This rather lame play on the word ‘strike’ might or might not have been hilarious for a Victorian audience. I suspect it was no funnier then than it is now. However, it demonstrates that the set was a light-hearted talk about a soldier’s life and would have been classed as entertainment rather than an educational lecture.

The faces of the men photographed are interesting. Let’s assume that they actually were Army recruits. They would have been excited and apprehensive, making new friends and thinking of the life they have just left and the unknown one to come. To me, these are modern faces, expressing the same joy, hopes and fears that their equivalents must feel today. It’s possible, of course, that they are actors, just posing for the shot but I suspect not. What do you think?

2 thoughts on “A Victorian magic lantern slide of Army recruits”