I have a group of magic lantern slides in my archive entitled ‘Building a Man of War’. Often, only a few slides from a set have survived the century or more since they were made. Being made of glass and quite fragile, they were easily damaged and, in addition, between the first and second world wars, millions of slides were thrown away, as they were considered to be an old fashioned form of entertainment. I have a rule of lantern slides which is that the more interesting the images, the more likely the slides are to be damaged, uncaptioned or in incomplete sets. As my wife regularly reminds me, I’m a cup-half-empty person!

Sometimes, manufacturers put hand-written or printed captions on their slides, and this, of course, is now a useful source of information. The Magic Lantern Society has a ‘readings’ (lecturer’s script) library for its members so, given the title of a set, if you’re lucky, the original script might still be available. If though, there are no captions and no reading available, then it’s a matter of carefully scrutinizing each image to look for clues about the subject matter and location. 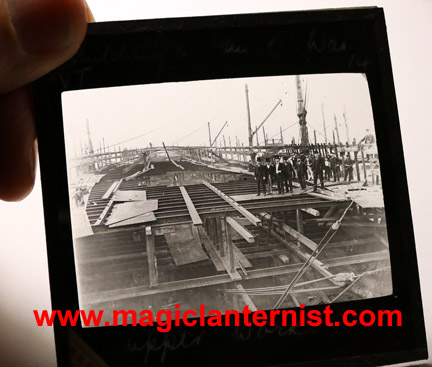 There are fifteen slides in this group from an original set of unknown size. On each slide, a hand-written caption gives the name of the set ‘Building a Man of War’ and describes the activity shown in just one or two words. The Magic Lantern Society doesn’t have a reading for this set but one of the photographs is a panoramic view of the shipyard and the large building in the foreground has the yard’s name on it ‘The Thames Ironworks and Shipbuilding Company’. Now, with a bit of research on the internet, instead of the slides being an interesting but anonymous group of Victorian, shipbuilding photos, they relate to a specific location, activity and time period in Britain’s maritime history. And the icing on the cake is to have close-up views of the men who built the ships. What a remarkable social history record! 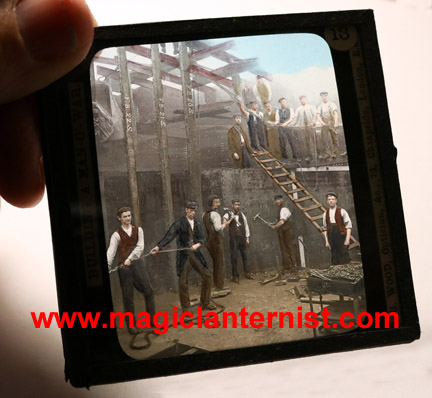 The Company, by the way, is well worth a few minutes research, as it had links with Isambard Kingdom Brunel and was involved in major engineering projects other than ship building.

If you would like to vote for me in the UK Blog Awards 2017, please click here. Just four days left to vote.

If you found this interesting, there’s lots more here and you can receive new posts by clicking ‘follow’ at the bottom of this page.