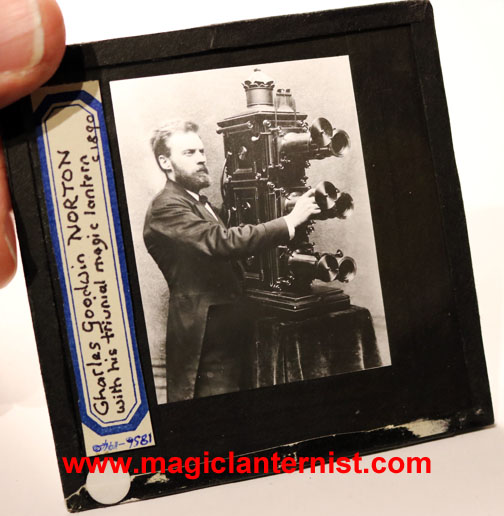 The magic lantern slide projector was invented in the 1640s, so we have a three hundred and forty year history of entertainment using projected images. Actually, big screen entertainment goes back a lot further than that, as shadow shows have been performed in China, Java and Indonesia for at least 1,200 years ….. and still are today. A shadow show is where an audience sits in front of a screen, with puppeteers behind and a light source behind them, so the puppets appear on the screen as silhouettes. Interestingly, there is a tradition in some countries where the men sit behind the screen (the same side as the puppeteers) and the ladies in front. Perhaps the men want to see the technical gubbins. ‘Gubbins’! When did you last use that word? It is, to me, a remarkable fact that our oldest known form of screen entertainment, a shadow show, won Britain’s Got Talent in 2013!

In the 1840s, magic lantern showmen realised that changing and moving images are far more captivating than still ones. One way of achieving such effects was to use a multi-lens biunial (two lens tubes) or triunial (three tube) magic lantern. Special effects could be produced by projecting two or more superimposed images onto a screen and gradually fading from one to the other. For instance, if you are showing two pictures of a country cottage but one shows it during the day and the other at night, then the scene slowly changes from day to night ….. magical for Victorian audiences, less so now.

I’ve discussed dissolving views in a previous post but today’s photo shows the very proud owner of the hardware that produced them, a triunial magic lantern, and what a magnificent beast it is. They were very expensive to buy (and still are) and, as such, usually belonged to professional lanternists who were at the top of their game. Working one required a range of skills, as each projection tube had its own light source, often limelight, which needed to be adjusted throughout the performance; the slides had to be precisely aligned to obtain the required effect and could have levers and handles to turn to produce movement; he might be reading a script and responding to the audience and preparing the next slides, all at the same time. There are a just a handful of people in the world who can still do this and it’s amazing to watch them master the equipment and dazzle the audience. Unfortunately, I’m not one of them!

Today’s magic lantern slide is of Charles Norton who was a top-league lanternist and a renowned author of ‘magic lanterns for dummies’ type text books.

If you would like to vote for me in the UK Blog Awards 2017, there’s just a few days left, so please click here.

If you found this interesting, there’s lots more here and you can receive new posts by clicking ‘follow’ at the bottom of this page.