The first passenger railway in the world ran between Manchester and Liverpool in England and started operating in 1830. It was a commercial success and investors poured money into new railway companies, to satisfy the public’s desire for fast, comfort, affordable transport. They were the dot com investments of their day and some made shareholders very rich, some didn’t. The railway companies employed the best engineers available and one of the greatest was Isambard Kingdom Brunel, still admired today for his bridges, tunnels and ships but perhaps, most of all, for the Great Western Railway which commenced operations in 1838.

Brunel chose a different gauge (the distance between the rails) for the GWR to that used by his competitors. His ‘broad gauge’ was seven feet and a quarter of an inch, whilst others chose four feet, eight and a half inches. The advantage of a broader gauge was that the trains were more stable with better ride characteristics and were more spacious for passengers; the downside was that the track-bed, bridges, tunnels etc. were bigger and more expensive, as were the locomotives and carriages. By the 1890s, having a different gauge to other train operators was becoming a problem, as it wasn’t possible to run trains on each other’s track. Eventually, the Great Western converted all of its lines to what had by then become ‘standard’ gauge and completed the task by the end of 1892. Can you imagine the Board Meeting at which the GWR Directors made that decision? “Gentlemen, to survive as a business, we need to rebuild our infrastructure and replace all of our rolling stock .…. whoops! sorry!” Today, British standard gauge is used in many countries around the world because we built their railways and manufactured the rolling stock. 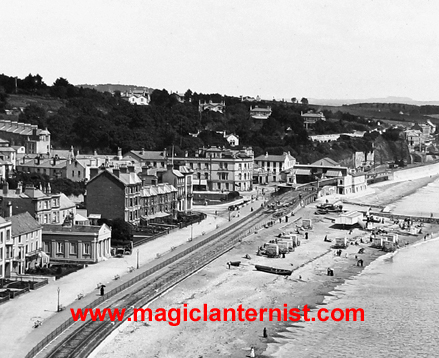 Brunel was, without doubt, a brilliant engineer and is remembered fondly as such. However, he didn’t always get it right. Some of his projects, such as the Great Eastern Steam Ship, were financial failures.

So, what are today’s photographs from my archive about? Well, this is Dawlish in Devon on the south coast of England, where Brunel’s railway runs alongside the coast for several miles. It is one of England’s most picturesque and famous lines. The first photo is of a broad gauge locomotive in Dawlish Station. In the second, men are working on the track near the station and appear to be converting it to standard gauge. If indeed, that’s what they are doing, then the photographer captured an important moment for the future of Britain’s unified railway network.