In Britain, the Royal National Lifeboat Institution (RNLI) is a national treasure (and not in the ‘anyone famous who’s managed to stay on the telly longer than most’ sense). It has hundreds of lifeboat stations around the coast funded by public donations and manned (and wo-manned these days) by volunteers who, when they receive a call, leave whatever they are doing to respond to an emergency at sea. Behind every launch, of course, these men and women give up many hours of their time to train and maintain the equipment.

Since its formation almost two hundred years ago, there have been thousands of rescues and over 140,000 lives saved (including more than 400 in one incident alone) as a result of lifeboat crews’ selfless actions. Many have lost their lives whilst trying to save others and the slide above relates to a particularly dreadful incident.

The early boats were open rowing boats and it would have taken a very brave man indeed to leave the safety of the shore in a gale or storm, to rescue someone he didn’t know and to find the strength and stamina to keep rowing in such conditions.

The role of lifeboatmen was reflected in Victorian magic lantern slides in various ways. There were moral life-model stories about lifeboat rescues, with uplifting themes of heroism, not always with happy endings; a mass-produced set of eight, highly coloured, lithographic slides called ‘Our Lifeboatmen’ (often for sale on Ebay) and, my favourites, photographic slides, usually taken by amateur photographers, of lifeboats in action.

I hope you enjoy today’s magic lantern slide images. The first one is of Henry Freeman, the only survivor of a rescue in 1861 in which all of his crewmates drowned. He survived because he was wearing one of the ‘new’ cork lifejackets. The second is a lifeboat being launched with the aid of a team of horses and finally a lifeboat crew wearing cork lifejackets. 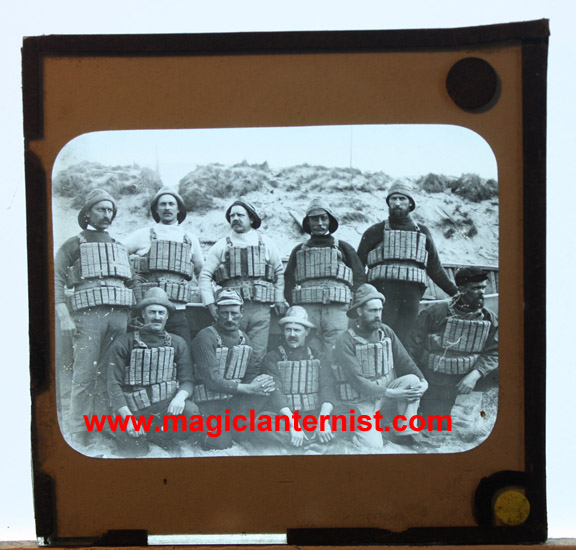