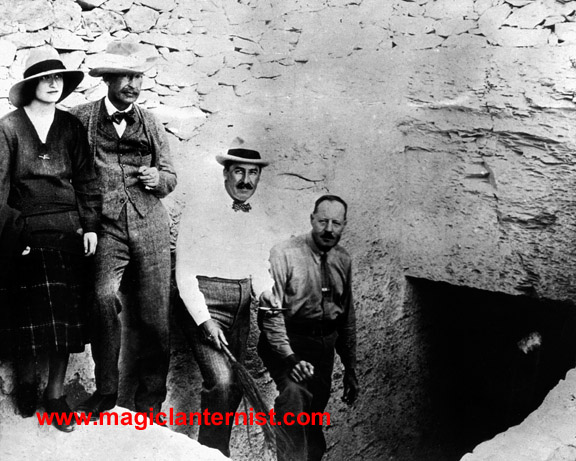 There’s a new series coming soon on British television called Tutankhamun, so I thought I would be ahead of the curve (probably for the first time in my life) and share these magic lantern slides from my archive with you.

King Tut’s tomb was discovered by Howard Carter in November 1922 and he subsequently became world-famous. What is less well known is that, as with many cases of ‘instant’ success, by then he had spent over thirty years in Egypt searching for and finding other tombs, all of which were empty because grave robbers got there first, probably hundreds of years before him. However, Carter established a reputation for his innovative and methodical approach to archeology and it was for this reason that Lord Carnarvon chose him to lead the search for Egyptian antiquities in the Valley of the Kings. As an aside, does anyone know how Carnarvon gained the rights to do this? Egypt wasn’t strictly part of our Empire but we did control the military and its civil service and finances, mainly because of our interest in the Suez Canal. Did the British Government ask him to take on this task, was it a commercial venture or something else? 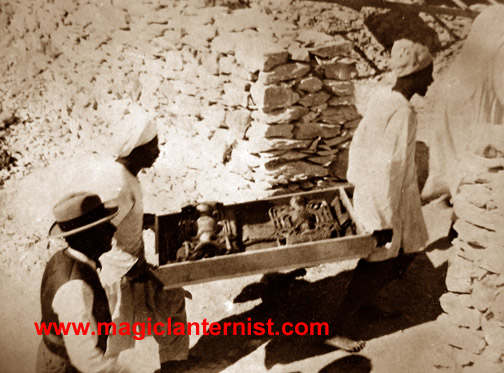 From 1907 to 1914 Carter, sponsored by Lord Carnarvon, searched but found very little. The First World War put a temporary stop to exploration and when it resumed after the war, Carter’s finds continued to be disappointing. By 1922, Lord Carnarvon had given up on the project and informed Carter that this would be his last season. It was then that he made his discovery so, after thirty years work, this was very hard won success. When Carter realised the potential significance of his discovery, he telegraphed Carnarvon to join him and together they broke through the entrance of the tomb. When Carnarvon asked whether he could see anything through the first small hole, Carter famously said “Yes, wonderful things!”

The first photograph shows a group of people on the steps leading into Tutankhamun’s tomb. They are, from left to right, Lady Evelyn Herbert (Carnarvon’s daughter, I think), Lord Carnarvon, Howard Carter and Arthur Callender (Carter’s second in command). The next photograph is of items being taken away from the tomb and the last one is of Egyptian soldiers guarding the entrance shorty after its discovery. 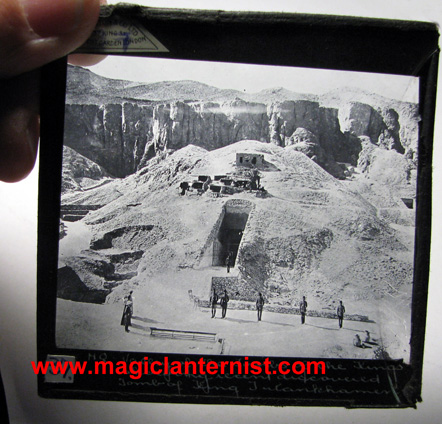 If you found this interesting, there’s lots more at www.magiclanternist.com/archive-blog-posts/ and you can receive new posts automatically by clicking ‘follow’ at the bottom of this page.