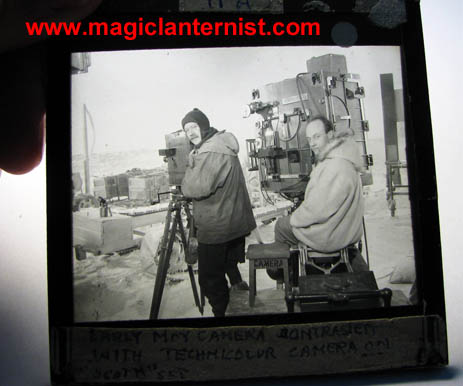 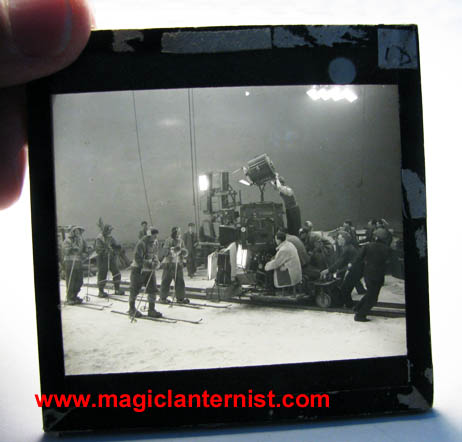 Some years ago I bought a collection of about eighty magic lantern slides on Ebay. They were obviously modern (modern for me is anything after 1900) and poorly described and photographed but looked interesting. As is often the case, it’s only when you have time to look at lantern slides more closely that you discover whether you’ve bought a pile of junk or something special. These turned out to be the latter. They are, I believe, part of an archive belonging to Ealing Studios, famous for its Ealing Comedies. There are photographs of film sets including Whisky Galore and Oliver, early studio buildings, behind-the-scenes equipment and technicians and lots more ….. really quite amazing. The three slides above show the filming of ‘Scott of the Antarctic’, made in 1948 and starring John Mills in the lead role.

So how did they make their way from Ealing Studios to me? My guess is that in the 1960s, an employee was asked to clear out a storeroom and found hundreds or maybe thousands of old glass slides that, in those days, had no financial worth and were not recognised for their documentary value. Rather than throw them away, he or she decided to keep them and perhaps several owners or attics later, they appeared on Ebay and I bought them.

If you found this interesting, there’s lots more at www.magiclanternist.com/archive-blog-posts/ and you can receive new posts automatically by clicking ‘follow’ at the bottom of this page.